The Task at Hand 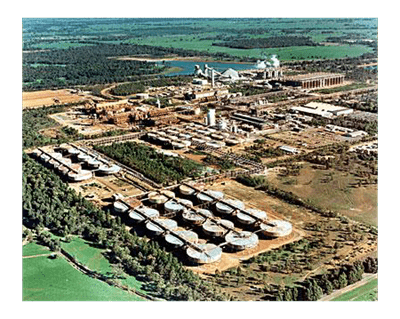 Located just 9.6km from the Pinjarra Township, the Pinjarra refinery is one of the world’s largest refineries. Continuous blockages due to roots entering the system and infiltration into the ground caused Alcoa to engage with Tunnel Vision to repair these lines all without disturbing the production process of the plant.

After an initial CCTV drain inspection of the sewer drainage system Tunnel Vision identified areas of concern where root blockages were resulting in blockages. The specialised team also found cracks and areas of pipework that was broken allowing sewer water to leach into the ground causing environmental issues and ground erosion. Following the inspection, Tunnel Vision recommended that the sewer drainage be relined using advanced Nuflow Blueline technology.

An alternative to relining would be to excavate and replace the areas of drainage that were damaged. This would have been expensive, disruptive and labour intensive due to the nature of the plant being operational 24hours a day 365 days a year. This would have resulted in a loss of production and productivity at the plant costing Alcoa thousands if not hundreds of thousands of dollars in costs.

Utilising our Blueline Technology, Tunnel Vision has relined over 500m of sewer drains ranging in size from 100mm to 300mm diameter. Over a 3 day period, Tunnel Vision was able to clean, reline and do the final inspection on up to 120m of sewer drain lines with no disruption to surfaces, essential services, production or employees of the plant.